A Comprehensive Guide to Bhagavad-gita 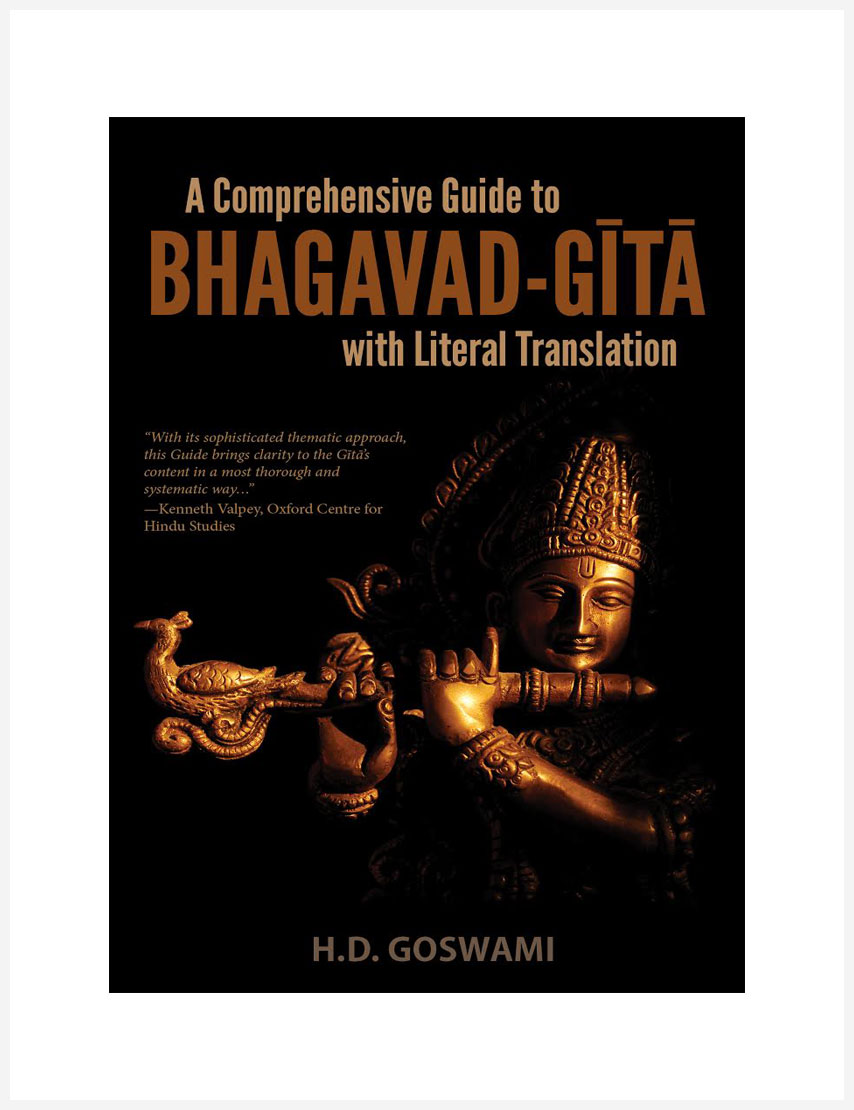 A Comprehensive Guide to Bhagavad-gita

For over 45 years, Hridayananda das Goswami has shared the wisdom of the Bhagavad-gita with ISKCON communities and at prestigious universities around the world. Thus, this publication is the fruit and culmination of a long, distinguished career of studying, teaching, and living the text.

In the book’s introduction, Hridayananda das Goswami describes his inspiration and aspirations for the book. He writes:

“Having read, studied and cherished the Gita for decades at the feet of my teacher Srila Prabhupada, I could not help but share the profound conceptual connections that make this Sanskrit text so magical. The Gita is widely recognized as a work of spiritual and philosophical genius, and early on I fell in love with its Sanskrit text. My sincere wish here, through explication and translation, is to bring the general reader deep within that original Sanskrit. I hope you enjoy the journey.”

A Comprehensive Guide to Bhagavad-gita serves as a companion to A.C. Bhaktivedanta Swami Prabhupada’s groundbreaking Bhagavad Gita As It Is. Prabhupada personally instructed Hridayananda das Goswami to present these teachings “in your own words” to learned Western audiences. Thus, Hridayananda das Goswami has striven to combine rigorous study with simple language to give his readers easy access to the Bhagavad-gita’s complex and sophisticated treatise.

Thematically divided into twelve parts, each with multiple subsections, A Comprehensive Guide to Bhagavad-gita is unique in that it elucidates key Sanskrit terms in the original text by using the literal meaning of the Sanskrit words, thus allowing the text to define its own terms and make its own arguments. Special attention is given to categories such as knowledge, meditation, karma, devotion, sacrifice, renunciation, equality, and liberation. A Comprehensive Guide to Bhagavad-gita also includes a precise, literal translation of the ancient text.

Although currently under review by several mainline publications, A Comprehensive Guide to Bhagavad-gita has already received praise from ISKCON leaders as well as prominent scholars of Sanskrit and Hindu Studies—a sample of which is included below.

“Especially impressive is the fact that this volume not only provides the reader with a stimulating learning experience, but also serves as an exceptional reference book for specific topics. Thus, in terms of my own Gita studies, I am happy to have the benefit of this Comprehensive Guide, as well as the excellent, highly literal translation that comes with it. I certainly will be recommending this book to my students of Indian philosophy.”
–Krishna Ksetra Swami, Oxford Centre for Hindu Studies

“Throughout this work we are graced by the knowledge, Sanskrit expertise and personal illuminations of one who is not only a highly trained scholar, but also a widely experienced spiritual teacher. Goswami is to be commended for so eloquently polishing the various facets of this most precious and rare jewel of sacred literature so that we, the readers, may perceive that much more of its unbounded brilliance.”
–Graham M. Schweig, Professor of Philosophy and Religion, Christopher Newport University

“In the late 18th century, Bhagavad-gita became the first Sanskrit work to be rendered in a European tongue, and since that time it has generated countless translations and secondary analyses. Among these, however, H.D. Goswami’s Comprehensive Guide with Literal Translation excels in its capacity to schematize and summarize the Gita’s powerful appeal as a source of perennial wisdom. The literal translation’s careful nuancing demonstrates the author’s Sanskrit mastery and philosophical expertise, while the Guide’s focused precision and theological depth reflect the training of a Harvard doctorate as well as the spiritual insight of one dedicated to the sannyasa (renounced) order.”
–Edwin Bryant, Professor of Hindu Religion and Philosophy, Rutgers University

This site uses Akismet to reduce spam. Learn how your comment data is processed.

All items are shipped USPS